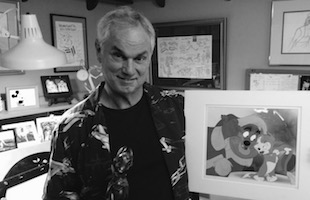 John's interest in art began at the early age of three, so his mother tells him.  "I remember drawing and playing with clay a lot," re recalls. "But it wasn't until I was 11 that I became interested in animation."

"It all began when I started to make a puppet duplicate of Walt Disney's PINOCCHIO.  I went to the library to study the drawings of Pinocchio, and I found a section in the book on how animation worked.  I ran home and began doing my own animation. I've been hooked ever since. I'd even go to Disney's animated movies and smuggle in a camera to take pictures so I could imitate them.  I must have spent fifty dollars in film over the years."

John was fourteen when he first tried to get a job at Disney.  "I didn't get past the guard at the gate. But he liked my portfolio."  John was persistent and wrote many letters to the animation department asking about technical information and job opportunities.

His ambition was endless.  At 21, he returned to Disney with a very fat portfolio.  This time he got past the guard. "They liked what I had, but they told me I was weak in my perspective.  But I was close." One year later he returned and was hired as a background artist.

John was lucky to be able to train under two veteran animators:  Ollie Johnston and Frank Thomas. "It was a terrific opportunity," he says.  "I learned quite a lot in a short amount of time."

In 1974, John, along with Gary Goldman and Andy Gaskill, was promoted to full animator status on WINNIE THE POOH AND TIGGER TOO.  He then began work on THE RESCUERS (1977) under the supervision of Ollie Johnston. John was interested in animated human characters.  Penny, one of the stars in RESCUERS, provided the perfect opportunity. He volunteered to work on Penny and the directors gave him a chance.

"It was very difficult work," he says.  "Human characters are quite difficult to animate.  If the character is slightly off the mark, it fails miserably, especially with the Disney standards so high.  One problem is that the audience can compare them to something that is real; the characterized animals they can't.  I went to the parks and playgrounds to study how little girls act and move. I had to become a little girl because an animator must also be an actor; he acts with his pencil."

After completing work on RESCUERS, he took the position of directing animator and animation instructor on PETE'S DRAGON (1977).  Working with Don Bluth and Gary Goldman, he taught the art of animation to the young talent. He also worked on the Disney animation review board, which selected animation portfolios from the applicants to the studio.

As a directing animator, John animated and helped to design characters on the Disney featurette, THE SMALL ONE (1978).  He was a major part of the training program on this film, helping new animators to understand advanced principles of the industry.

Early in his career at Disney, John developed friendships and working relations with future partners Don Bluth and Gary Goldman.  The three shared a common goal -- to revive the classical animation style seen in early Disney Classics. Working weekends and evenings, in a studio they built in Don's garage, John helped produce, edit, write, and animate the featurette BANJO, THE WOODPILE CAT (1979).

Near the completion of BANJO, John along with Don and Gary, resigned as directing animators at Disney to form their own production company.  Their actions eventually led to exodus of an additional eleven artists from the studio.